The Praia de Tavira is the region’s finest and most popular beach, which is connected to Tavira by a regular and inexpensive ferry. The beach is situated on the north-eastern side of the Ilha de Tavira, an idyllic sandbar island that extends for 12km along the Ria Formosa Nature Park.

Golden sands and crystal-clear waters, what more can you want for a holiday?

The Praia de Tavira is the closest beach to Tavira, and when combined with the regular ferry, makes it a popular choice for a day on the beach. The beach has a wide expanse of soft golden sands, with clean, calm sea waters, and is suitable children and families. On the Ilha de Tavira there are excellent but low-key tourist facilities including cafes, restaurants and a popular campsite.

The Praia de Tavira is a wonderful beach, and for certain visitors, it will be the only beach visited during their holiday to Tavira. This article will provide an introduction to the Praia de Tavira and explain how to travel there by ferry, detail tourist facilities and enjoyable beach walks.

During the summer expect the ferry to be very busy with long queues, especially when returning to Tavira at the end of the day.

The ferry service between the Cais das Quatro Águas pier and the Ilha de Tavira is a year-round service and is a much shorter journey, taking only 10 minutes. The pier is located 2km south of Tavira (GPS 37.11651, -7.62928) and is very convenient for visitors with a car, as there is a large car park close by. The ferry fares are, €2.00/€0.90 (adult/child return).
The latest timetable can be seen on the Silnido (ferry company) website:
https://www.silnido.com/tavira

All fares cost 25% more at night. Water Taxis can be chartered from Tavira harbour or the Quatro Águas pier; they can also be booked through tour companies: http://www.sequatours.com/watertaxiservice.html

The beach is very popular but the golden sands extend for 7km along the coastline so there is always space to be found. Just a 5-10 minute walk along the coast will leave the busy section of the beach and find an almost deserted section of beach.

The Tavira beach is family friendly and there is lifeguard supervision during the summer season. Be warned the sea is chilly even at the height of the summer, only reaching 21C in August.

The sea waters of the Praia de Tavira are crystal clear but are surprisingly cold, even at the height of the summer. During the peak season (June-August) the sea temperature is 22C, but drops to 20C either side of the summer and only 16-17C in the winter (December – February). The sea water temperatures are cooler than the Mediterranean Sea as they are fed by the Atlantic Ocean. If you are planning to spend an extended period in the sea consider using a wetsuit.

There is a popular campsite on the island, the Camping Ilha de Tavira. The campsite is open from May through to September and permanent tents with electricity can be rented. The campsite is below the shade of the pine forests and has good facilities including BBQs and is highly recommended. 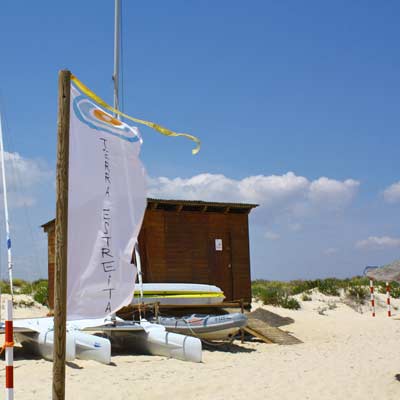 The second beach, Barril beach is much more interesting and is a 40 minute walk from Tavira beach. Barril beach is a former tuna fishing community and the huts have been converted into stylish cafes and restaurants. The anchors that were used to hold the nets in place during the complex process of tuna fishing have been aligned on the entrance to the beach. This rusting memorial of over a hundred anchors is called the Anchor Cemetery.

The Cemetery of Anchors on the Ilha de Tavira

Algarve Introduction
Where to stay in the Algarve?
The Algarve for Teenagers
1 Week Algarve Tour

Things to See In Tavira

Tavira-Algarve-Portugal.com, with over 200 pages of holiday guides, if its not here it's probably not in the Algarve

The best guide to Tavira